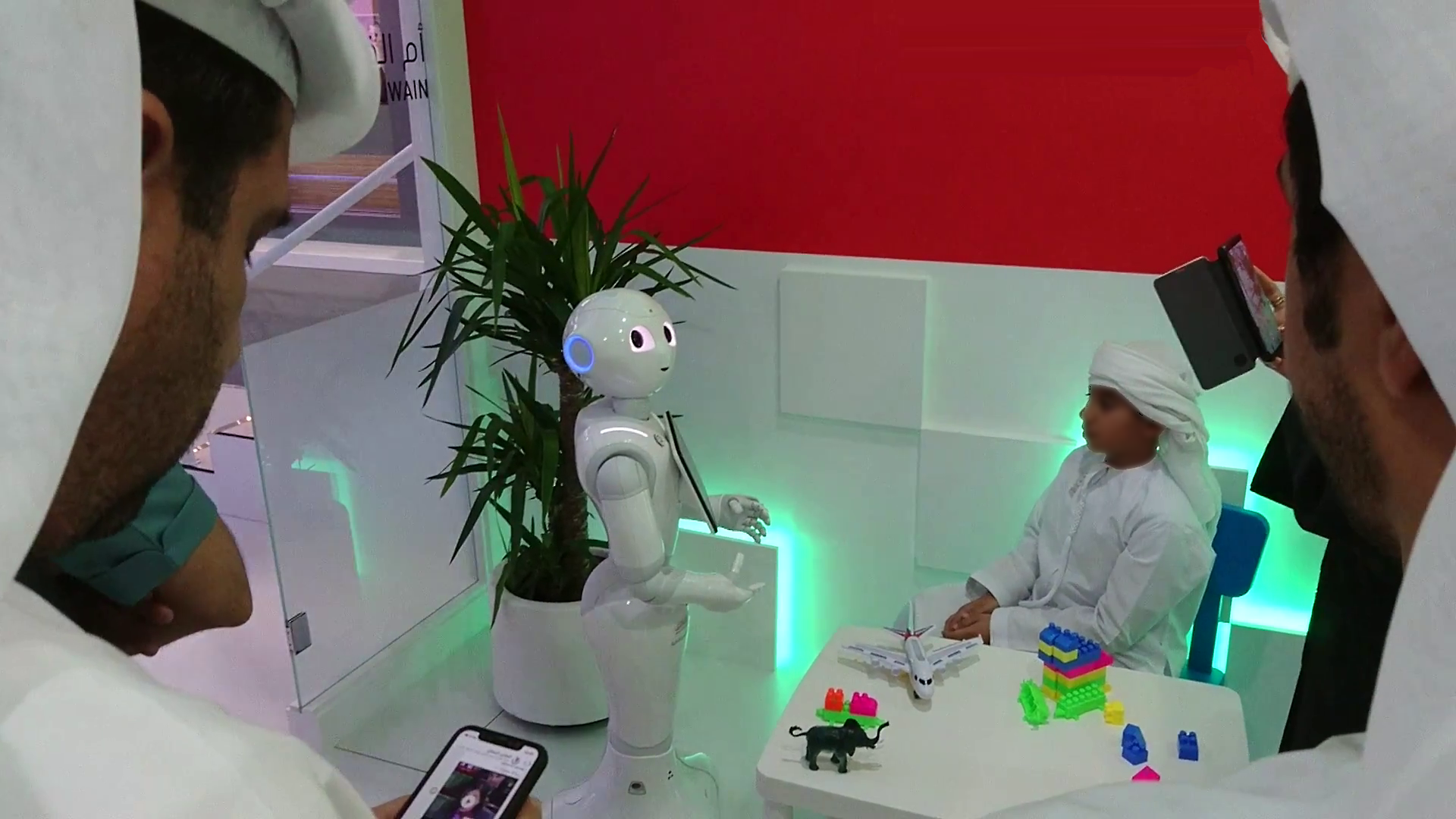 By vitor.pereira@gfi.pt September 12, 2019 No Comments

During the recent years, we can witness the growing importance that robotic developments are now taking. From self-driving cars to life-like android robots, we can witness their presence in a multiple fields of application. However, humanoid robots seems to be more targeted towards entertainment, such as in exhibitions and theme parks, despite the technological improvements that they went through.

Humanoid robotics is now targeting new business-oriented markets, as true phy-gital channels to reach towards people. Already assuming services such as in the welcoming industry or easing people’s experience in the retail and hospitality businesses, they now start to be truly considered as a mean to bridge the gap that separates us from traditional digital devices.

It is such a challenge that GFI Innovation’s Social Robotics team decided to address last year, in a growing middle-eastern country where new technologies and practices, involving the latest of developments in robotic platforms & centralized solutions.

How to ease children’s emotional stress & pain: a Pepper Story.

Based on a close partnership with Pepper the Robot’s manufacturer, SoftBank Robotics, GFI has been developing solutions to promote the use of Pepper in a variety of markets. It is this recognition that attracted the Ministry of Interior and e-government bodies from a Middle-east country, in order to bring an innovative mean of interaction, involving children, in situations where physical presence has all its meaning.

Children, from a very young age, have a particular relationship with robots as to them, they feel like more than toys as they can talk, move and be physically present in their environment, like a human would be. Even more, they can go up to confide in them, in order to release particular pain and stress feelings that they could find hard to express to real people, because of fear or anguish.

Bring a new channel of communication

The challenge was then to create an environment, easy to use, and efficient for children specialists, in order to create a new bound between children that they would need to exchange with and Pepper the Robot, as in this part of the world, it also reminds them of a very well-known cartoon character. The immediate projection that the child would create on the robot, would lower the barriers that would normally arise when facing people, especially if they had been victims of bad behaviors, whether from men or women.

The human-like interactions that Pepper could trigger were vital in establishing durable communication with children. Also, it was necessary to complete this scope with multimedia contents in order to support or ease the expression of the children.

Ease the follow-up and exchange procedures

This experience had also to facilitate existing administrative processes in order to centralize case information for a better use and correlation between specialists. The ability of constructing a wide range of interaction scenarios would thus allow them to capitalize on their knowledge, but also, to expand their scope as being able to address potentially children from different nationalities, in multiple languages.

How was this project accomplished?

The years invested in developing human centered interactions allowed GFI to quickly create the specific Pepper applications and associated interfaces for specialists that would allow them to establish this relationship between the robot and children. The interfaces and animations demonstrated by Pepper had to be able to match children’s expectation in terms of exchanges, body movement and dialogs.

A specific interface was created to handle the administrative aspects of the project, such as question and scenario managements. Integrating innovative mechanism such as emotional analysis, was also an experience changer, as during conversations, these elements were automatically captured and added to the synthesis of the conversation. Specialists were thus able to determine the particular effects of the scenarios they were addressing.

As the solution had also to be compliant with the local laws regarding the sensitivity of the data handled, all components of the solution were carefully selected and able to perform even on limited technical environment, from a centralized office, to an isolated room.

Where can we go from there?

As the project reached its original goal, it raised considerable requests for evolution. With the development of artificial intelligence technologies, it is already foreseen to extend the initial scope of the project, to be able on a first stage to extract behavioral patterns according to the data being captured, in order to suggest course of actions to the specialists, in the questions or part of scenarios to activate, the next step being that the solution would be capable of training associated models to automatically choose the next set of questions to ask.

Also, as computer vision related researches are issuing new means of human emotion analysis, it is foreseen to complete the scope of emotions and variations being detected on the subjects to automatically input them as crucial variable to the assisted & automatic response models, to ensure that the most adequate reaction from the robot would be triggered.

The local recognition that was acquired through this project, led our client to be fully recognized as leading body in this particular course of action, being awarded multiple titles as most innovative solution in this field. It only confirmed that their vision on how robotic applications can be significantly disruptive, bringing new means of addressing complex situations.

Involved specialist were highly impressed by the quality of results they were able to acquire through this new experience, but also to see how children were behaving towards Pepper, finding in it a true friend.